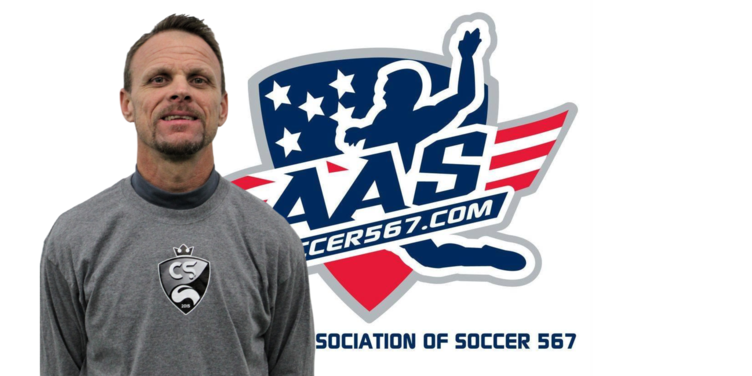 The American Association of Soccer 5-6-7 (AAS567) announces the appointment of Craig Rhodis to the new key position of Director of Coaching and Player Development. The Director of Coaching and Player Development will be in charge of recruiting quality coaches from around the country for our USA567 National team program, creating a coaching training and licensing program for the federation, and coordinating player camps and combines for player recruiting and development.

"We needed to find someone that would work well with our current staff of USA567 GM and Federation Vice President Bernie Lilavois, and US National Arena Soccer Team Head Coach Phil Salvagio," states Federation President Kevin Milliken. "Also we wanted someone who has a real gift in arena and small-sided soccer game strategy, and a passion for training and player development and Craig checks off all those boxes."

Rhodis has extensive playing and coaching experience and is well-respected in the soccer community. He played professionally for 16 seasons and has earned several coaching licenses and his scouting certificate. He has coached at every level from youth to professional and genuinely enjoys developing players for future success. Along the way he won the PASL-Pro Coach of the Year award in 2008-09 and has previously served as Head Coach of the US National Arena Soccer Team. His current roles include being the Head Coach for the Cincinnati Swerve men’s team and the Cincinnati Sirens women’s team. Both teams were named PASL National Champions in 2019, with the Sirens also playing in the WPSL.

“I’ve had the opportunity over my career to play for and coach so many incredible people and I am really looking forward to applying that knowledge to my new role. Being involved in all aspects of what the association does, from selecting coaches to putting together rosters and plans for the men, women and U23 groups to all be successful, is what excites me the most about working with AAS567. There is a tremendous pool of talent here in the United States and I am ready to get started,” says Rhodis.

Rhodis was an assistant coach for the men's USA6 team that competed last October in the WMF World Cup in Australia. "It was a great experience to work with Craig in Australia," states GM and VP Bernie Lilavois. "He provided really good strategic analysis in assisting coach Salvagio, and you could see the respect he built with our National Team players. He is a great addition to our organization."

The American Association of Soccer 5-6-7 will be announcing additional staff and programs in the near future in preparation for growth coming out of the Corona Virus Pandemic. The next scheduled international event is the Pan Am Cup October 8-11 in Las Vegas, which is the qualifier for the 2021 WMF World Cup next summer in Kiev, Ukraine.

The American Association of Soccer 5-6-7 (AAS567) is the officially recognized United States federation sanctioned by the World Minifootball Federation (WMF). Our confederation within WMF is the Pan American Minifootball Federation (PAMF). American Association of Soccer 5-6-7's mission statement is to make it simple for players, coaches, teams, clubs, and leagues to organize small sided games of soccer 5, 6, and 7-a-side, and arena soccer, locally in the United States. Our federation then provides those local teams and players opportunities to play in National and International competitions either through our national teams, or national and international competitions for teams and clubs.