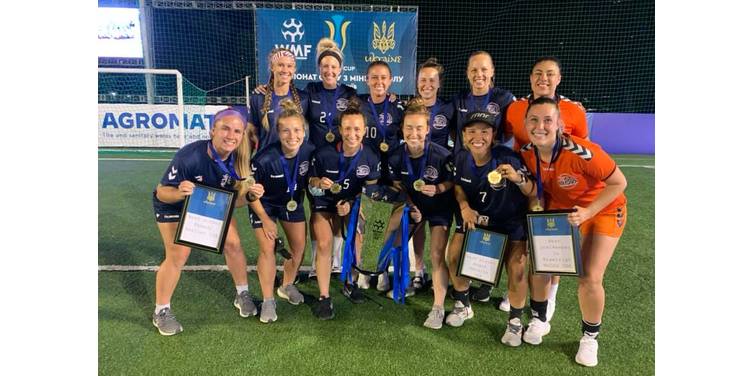 The USA567 Women's National Team are the first ever WMF World Champions after a convincing 10-0 win over Moldova, capping off their fifth win in four days.

The 10-0 win might not have been as dominant as their 18-0 win over this same Moldova team in the opening game of the tournament, but even when the goals weren't flowing the US still maintained a lion share of the possession, and continued to run teams into the ground. During the closing ceremony the US women gleefully celebrated in their Hummel uniforms, dancing, playing in the confetti, and posing with their new WMF trophy.

"We came to win and the thing I'm most happy about is that we set a standard for the rest of our US women's teams and also for the other countries," said US Head Coach Craig Rhodis. "Now they're going to try to catch us so it's going to push us to be better and push them to be better and that's what we want."

Braeleigh McCoy wasn't tested often in the tournament but she did everything she needed to do, backstopping five wins over 150 scoreless minutes.

The most daunting number was the overall goal differential of 48-2 including four shutouts.

While the US made it look easy there was nothing easy about their week. In addition to playing five games in four days, they started their journey in different cities, convened in Cincinnati for a training, drove to Chicago the next day and had a training, flew nine hours to Warsaw, and another two hours to Kyiv. They played in a new city, with an eight hour time difference, where more people than not don't speak English, and endured 40 minute bus rides to and from the stadium. The other countries in the tournament had similar stories, but only the US maintained their sharpness throughout the week.

After the game, McCoy was named best goalkeeper, Kessler received the award for top scorer, and Diaz was recognized as the tournament's best player.

“We have enjoyed this process," said Rhodis. "It's a process that really started at PASL nationals, with starting the player identification process, through the friendlies in Texas and Grand Rapids, and mini training camps in Cincinnati and Chicago, we really focused on not only identifying the players we would select, but also to prepare those players. We didn't assume we were better than any of the teams, we put the work in to be prepared."

Eleven of the 12 players on the US roster played in the PASL Women's league, continuing a trend to feature arena soccer players in minifootball events.

The US did not field a team in the adjacent WMF U-23 World Cup, but the winning Colombia men's team are confederation mates with the US in the Pan-American Minifootball Federation. Of the five World Cups WMF has staged, four have been won by PAMF teams, including the US men's team in 2015.

“For me personally I am blessed to have a group of ladies that are amazing both on and off the field," Rhodis continued. "These women are wonderful trailer blazers for those that follow them in future events. I am also blessed to have Mark Litton as my assistant coach for this event. I learned something each day from him, both on and off the field. I am blessed to have an association that has backed me at every point in this process. I have had so many coaches around the country, both PASL and futsal, helping me through this process who deserve a lot of the credit. Last but not least I am blessed to have a wife that understands my passion for the sport, and building it from the ground up. It's my hope that this will be the foundation for a very bright future on the women's side for our association.”